Dear Customers, our shop is OHJEWEL. We have copyright of our designs. If you find others steal our designs or photos, please kindly inform us. THANK YOU! Not too long ago, not a lot of people are familiar with moss agate. Fast forward to the present, and you can see this gem as a trendy and fashionable center stone of choice you can see anywhere you look.

Stone-studded jewelry pieces are chic accessories that are always in vogue. This is because they highlight the wearer’s prestige, power, and personality. Moss agate is the perfect example of stones that empower their wearer. This is why it is not a surprise that moss agate engagement rings have been seeing a higher demand now more than ever.

What is Moss Agate?

According to Wikipedia :"Moss agate is a semi-precious gemstone formed from silicon dioxide. It is a form of chalcedony which includes minerals of a green color embedded in the stone, forming filaments and other patterns suggestive of moss."

To better understand what moss agate is, first, you might want to learn more about its broader category in general. Agate is a type of popular semi-precious stone that has been used in jewelry for as long as the art of jewelry making itself. It is a form of chalcedony, a specific type of quartz.

This makes agate a relative of another form of chalcedony, onyx, as well as citrine and amethyst, both of which are varieties of quartz. The reason behind the popularity of agate is the fact that it is found in an extensive range of vibrant colors, typically displaying multiple colors in delicate and attractive banded patterns.

In particular, moss agate is one type of agate containing networks of green inclusions that are trapped within the stone. The inclusions may resemble green webs, mossy vines, branches covered in moss, or puffs of green-colored smoke.

You can also encounter other terms such as dendritic agate or plume agate used when describing these gems. One thing that all of them share in common is the distinct arrangements of the vivid green inclusions all over the semi-translucent stone.

Moss agate is an absolutely perfect choice for great lovers of the outdoors and plant life. The lush green color of the stone is not only reminiscent of the eye of vegetation. The uniqueness of every stone is also a pleasant reminder of the beauty of nature.

Is Moss Agate an Ideal Option as a Center Stone?

The answer is a resounding yes. Agate is known for its durability, which means that it can work great as a center stone. Moss agate is definitely not an exception to this. Its typical hardness on the Mohs scale is 7, making it durable enough for everyday wear. If you love to wear onyx or amethyst as a center stone, you will surely love wearing a moss agate engagement ring.

One of the most appealing features of a moss agagte ring is that it stands out. For those looking for something that stands out, Moss agagte might be the better choice over a diamond since it feels a bit more exclusive.  Moss Agtae is durable enough for an engagement ring due to its 7 out of 10 Mohs hardness

Although moss agate has desirable qualities there is one con to note. It can be difficult to compare moss aggate and diamonds,  Moss agagte is a very, very different looking gemstone  than a diamond ,it’s desirable for someone who is looking for a more unique and unusual engagement ring.every moss agate is natural, No two moss agate stones are the same, making each one unique. that is the uniquess of moss agate,When buying a moss agate ring, you can ask the merchant to provide a picture of the stone

How to care For moss agagte ring?

Where to buy moss agagte rings?

With moss agate engagement rings, you know you won’t only get a beautiful ring but also one that exudes a deeper meaning.

Now, scroll through the 20 of the most stunning moss agate engagement rings ahead. 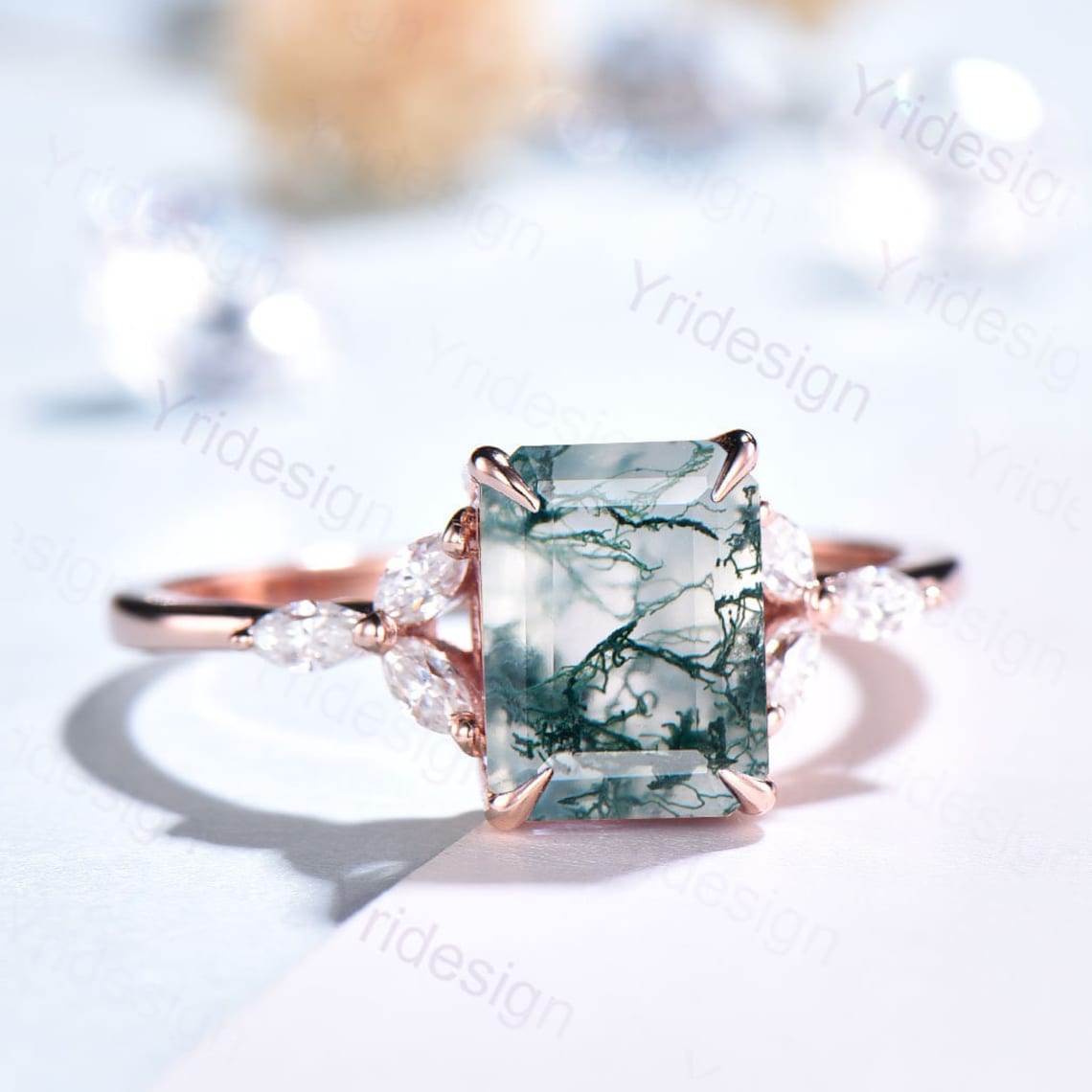 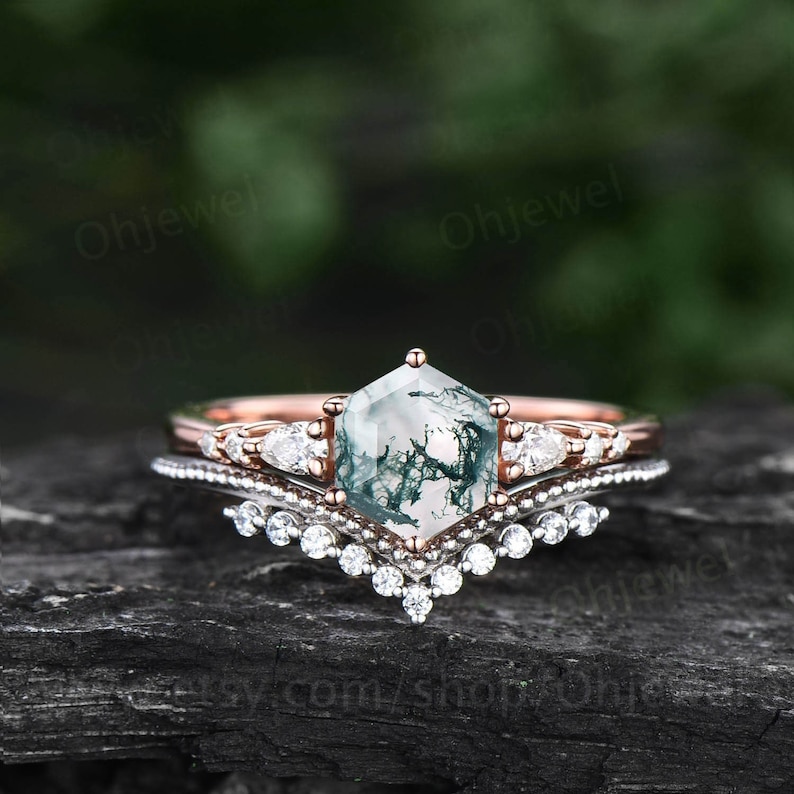 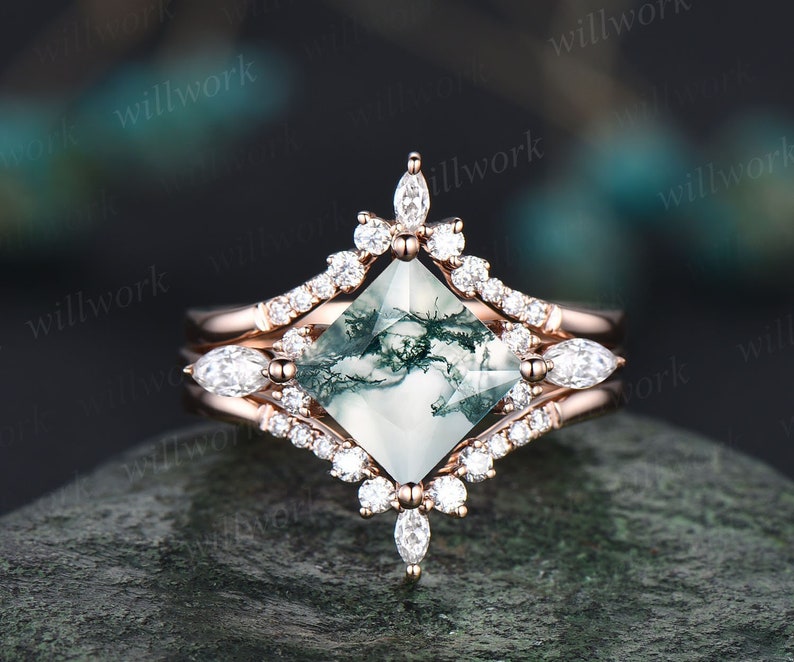 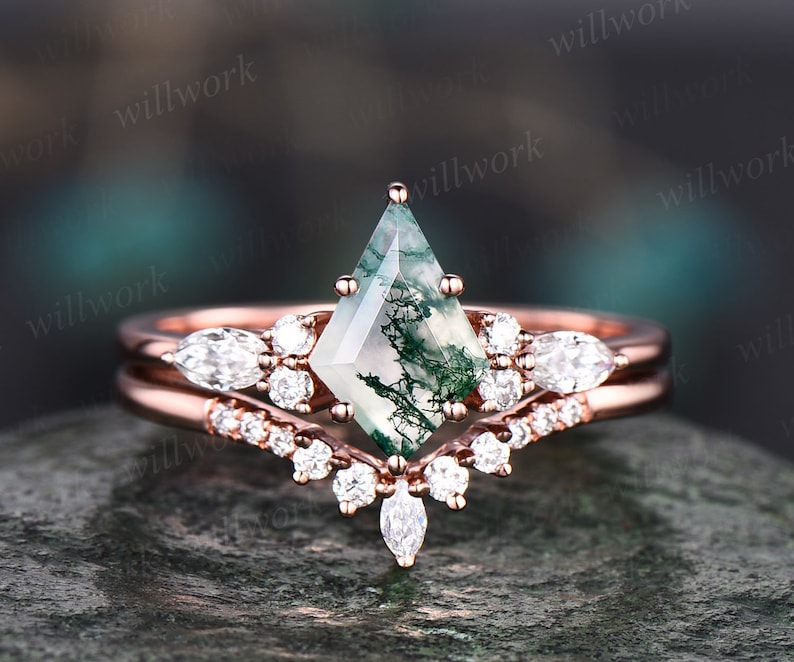